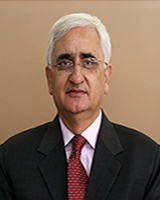 We are very lucky to have Mr. Salman Khurshid as our guide and mentor. Mr. Khurshid is an Indian politician and was the Cabinet Minister of the Ministry of External Affairs. He belongs to the Indian National Congress. He is a lawyer, and a writer who has been elected from Farrukhabad Lok Sabha constituency in the General Election of 2009. He belongs to the Farrukhabad area. Prior to this he was elected to the 10th Lok Sabha (1991-1996) from the Farrukhabad Lok Sabha constituency. He became the Union Deputy Minister of Commerce in June 1991, and later became the Union Minister of State for External Affairs (Jan 1993 – June 1996). He started his political career in 1981 as an Officer on Special Duty in the Prime Minister’s Office (PMO) under the prime minister ship of Indira Gandhi.